Hobart Brown Owls kicked off the year in the usual lovely clubhouse in Taroona:

with the beautiful playground for the Owlets outside: 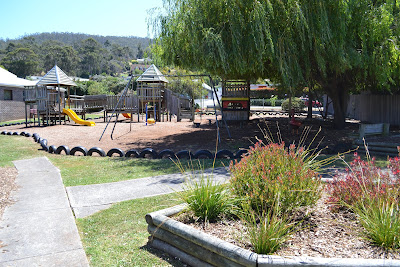 The Tassie weather gods were smiling (very!) brightly - so Sarah and Megan started off the meeting with some knitting work outside in the shade:

There was happy sewing; making of skirts by Lauren and a bag by Chloe

Virginia cut up some felt to make this gorgeous crochet rug:

And once Sarah and Megan had enough sunshine and hot weather, they came inside to use the magical ball winding machine (a first for many of us), with a happy result:

Next meeting is February 25th - hoping to see existing and new Brown Owlers there!


Posted by deadlycraft at 8:20 PM No comments: 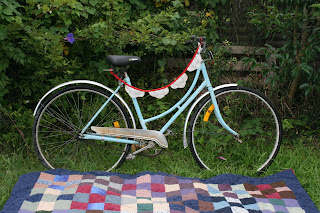 I hope to see you there if you can make it!

Have you made a New Years Resolution to craft more in 2012? Do you live in Sydney?

If you would like to become a Sydney Brown Owl then please head over to the Brown Owls Sydney Facebook page or email me at brownowlssydney (at) gmail (dot) com to get yourself added to the mailing list. 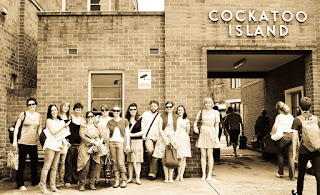 We (usually) meet on the 20th of each month where we craft, chat, have a cheeky wine and a laugh. This month's meeting was at Cockatoo Island where we had an amazing crafty cocktail session. Go here and here to see a write-up of the meeting!

Alternately, there is also a Sutherland and St George Brown Owls for those that live in the South. Check out the lovely Thouraya's details in the sidebar if you would like to attend their meetings.

Posted by Jessica Lonard (The Crafty Librarian) at 12:12 PM No comments: 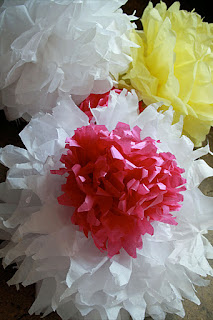 The delightful Zoe, who has been practicing her paper pom pom craft skills, will be taking us through a workshop on Wednesday 1st November at 7pm at the Sporting Club, Weston St, Brunswick, Victoria.

a. to make large size this will be using 8-10 standard sized full sheets of tissue paper, to make smaller ones you can cut the standard size up

b. Thicker tissue paper is easier to work with if you can get it

2. Wire (I will bring a whole heap of wire so people will not need to bring if they don’t want)

Zoe says, “They are incredibly easy to make so they certainly won't take a whole session to make depending on how many people want to make. So if you do want to go ahead with it I would suggest that people bring other stuff as well.”

“My friend has a market and she took these photos of ones I made for her market. Her market is called the Little Village Market Elwood.”

Welcome back to the Brunswick Brown Owls for 2012! Please note the change of fortnight; we’ll be rotating from here. If you can’t make it, we’ll pop up photos of the evening on our Brunswick Brown Owls facebook page so you can watch the fun too. We have almost 100 members, and you can be a part of our crafty community too! Come along and learn some new skills with us, and feel free to bring some materials to share!

The Sporting Club still has delicious tapas (4 for the price of 3, bargain!) and they even have discount price cocktails! Bonza! What a night! Bring your friends! 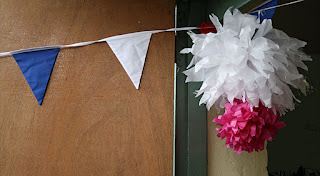 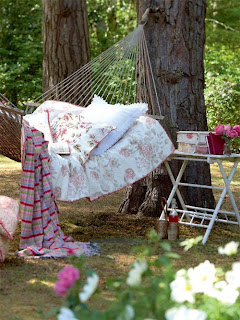 Hi there Adelaide Owls - Hope you've all had a relaxing Christmas and New Year. Nearly time for school to go back so we can all get in to the routine of term time.

We've decided to take Adelaide Owls a little more informal this year and will be posting up details of a cafe/pub meeting in the next few weeks. We are thinking maybe weekend too, maybe even a visit to the park where the kids can play too.

If you have any ideas for meeting spots or would like to coordinate a meeting let us know via the email. In the mean time happy crafting!
Posted by Cherry at 12:04 PM 4 comments:

Canberra Owls - New Year get together

We'll be starting our crafty meetings proper in February (the 18th we think - we have something super exciting planned, so pencil it in your diary!), but would like to invite everyone to join us for a drink and some afternoon tea on Saturday. Bring some crafting to do too, if you like!

It would be lovely to see you! Come and enjoy a relaxing arvo chat - we'd love to hear what you've been up to over the summer, and whether you have any suggestions for things you'd like to try at our meetings this year!
We are also hoping to be able to confirm dates for the year by next week!

Please RSVP in the comments so we know how many people we should snaffle a table for.
See you there!

Hello and happy new year!
Southside Owls will be on again in 2012!! As most of you know superwoman Kat is about to have her first baby very soon! So, I'm very excited to announce that the lovely Michelle from Frankie and Swiss will be co-hosting with me this year! 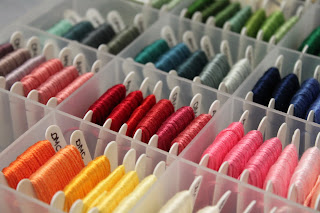 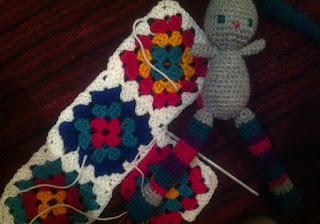 Happy New Year Melburnians (and beyond)!

Lets get on and do some crarfting, lets do that next tuesday, yes lets. Here are some details:

when: Tuesday 17th January 2012
at: 6.30 - 9pm
where: The Parlour, Madame Brussels, level 3, 59-63 Bourke St, Melbourne 3000
bring: BYO project of your choice
cost: no fee for attendance but you may like to purchase a drink or a delight from the Madame Brussels menu, by way of a thankyou for room usage
RSVP: in the comments section below please - indicating your name eg. Sue H

Will be lovely to see you, come along, come one, come all, and bring friends and nice people and new people, we like new people and old people as well and lets just all have a jolly january good time. 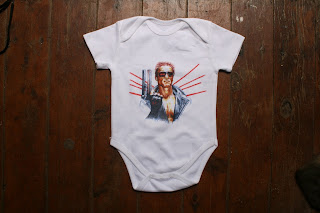 Come along for craft, coffee, and a catch up in sweet sweet air-conditioning!

I thought it was about time we posted a Bayswater (Perth) update for 2012.

Our group continues to grow but we still welcome new faces so if you have been thinking of coming, please do!

January
Our January meeting is happening on the 21st. We are heading to Knit the Beach as part of the Summerset Festival. This workshop will be held by the City of Stirling in order to produce crocheted and knitted items to cover parts of Scarborough Beach (aka yarn bomb the beach!). Knitting and crochet skills are not needed- there will be teachers. All you need to bring is a hook or needles. If you have any spare yarn laying around- bring that too!

If you are in Perth and cannot attend, you can still contribute by donating any spare yarn to any City of Stirling Library.
More info on this event can be found here.

Time
Meetings start at 2pm. You can hang around for as long or as short (?) as you wish.

Bring
Usually meetings are BYO but we will always notify you if a meeting will have a certain theme. We also ask for a gold coin donation to contribute to the hire of the meeting room.

We will update here again leading up to Feb, but at the moment, it looks like we will have Carolyn (our resident experienced dressmaker) showing us how to re-create an old favourite item of clothing by creating a pattern.

Please contact either Sarah or Megan if you are thinking of joining. We welcome all types of crafting experience (from zero to pro).

Our Facebook group is also a great way of receiving updates (and checkout what everyone is making). If you are not a bloggy person, but are on FB. Join the group!

Happy New Year Preston Owlers,
Here's a pic from our Christmas meeting. We celebrated a graduation, an engagement and a new baby. Congratulations to Keti, our chapter founder, who gave birth to baby Calvin in mid December. 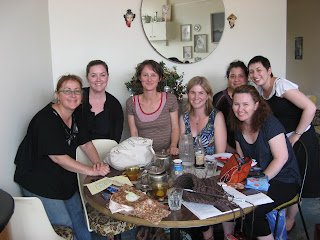 Our first meeting of the year is

January 22nd
Pearl Oyster
114 Miller Street Preston
2 - 4pm
bring some handheld craft and have a cuppa and something delicious from the Pearl
By popular request our Februrary meeting will be on Saturday the 18th in the afternoon at GJs Discount Fabrics in their lovely upstairs room. But more about that next post.
Posted by Rebecca at 7:38 PM No comments: